Starting for the good results reached in physics researchers in economics and finance have been interested in testing nonlinear dependence and chaos in economic models and data. A wide variety of reasons for this interest have been suggested, including an attempt to improve the forecasting accuracy of linear time series models and to better explain the dynamics of the underlying variables of interest using a richer class of models than that permitted by limiting the set to the linear case. But chaos theory has not had the same impact in the economics as it has in the hard sciences like physics. The literature did not provide a solid support for chaos as a consequence of the high noise level that exists in most economic time series, the relatively small sample sizes of data, and the weak robustness of chaos tests for these data. 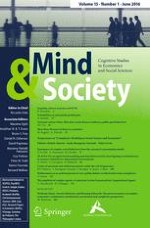 Cycles of maximin and utilitarian policies under the veil of ignorance

The simplicity of complex agents: a Contextual Action Framework for Computational Agents