The hydrothermal synthesis of Co3O4 particles using cobalt nitrate as the precursor and citric acid as a weak chelating agent was modulated using poly(vinyl pyrrolidone) (PVP) to control the shape and size of the resulting particles. The molar ratio of PVP to the cobalt in the precursor solution was key to controlling the particle morphology. In the absence of PVP, large truncated cube-like particles with a bimodal size distribution (200 and 1450 nm) are formed. When the molar ratio of PVP/Co is less than ≈ 0.5, the particle size is generally invariant. As the molar ratio of PVP/Co is increased from 0.5 to nearly 2, the cubes with rounded edges are formed, but the hydrodynamic diameter decreases from nearly 1.4 μm to 800 nm at a molar ratio of 1.8. At PVP/Co > 2, there is a significant decrease in the particle size down to 142 nm at PVP/Co = 3.5 and the shape becomes spherical, but the particles remain crystalline, characteristic of Co3O4. The size of Co3O4 particles was also determined using scanning electron microscopy. This size is consistent with the particle size obtained from dynamic light scattering. A competitive growth mechanism between free cobalt ions and PVP-bound cobalt ions in the solution was proposed to explain the influence of PVP on the size and shape of the Co3O4 particles. Due to heavy metal specificity for the binding with PVP and the crystal space group for metal oxides, the evolution in particle shape is not universal with no apparent change in the shape obtained over a similar PVP concentration range for iron oxide.
× 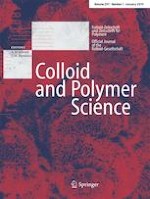