The time that it takes an occupant population to reach safety when descending a stairwell during building evacuations is typically estimated by measureable engineering variables such as stair geometry, speed, density, and pre-observation delay. In turn, engineering models of building evacuation use these variables to predict the performance of egress systems for building design, emergency planning, or event reconstruction. As part of a program to better understand occupant movement and behavior during building emergencies, the Engineering Laboratory at the National Institute of Standards and Technology has collected stair movement data during fire drill evacuations of office and residential buildings. These data collections are intended to provide a better understanding of this principal building egress feature and develop a technical foundation for future codes and standards requirements. Fire drill evacuation data has been collected in 14 buildings (11 office buildings and 3 residential buildings) ranging from six to 62 stories in height that included a range of stair widths and occupant densities. A total of more than 22,000 individual measurements are included in the data set. This paper provides details of the data collected and an analysis of the data. The intention is to better understand movement during stairwell evacuations and provide data to test the predictive capability of building egress models. While mean and standard deviation of the distribution of movement speeds in the current study of 0.44 m/s ± 0.19 m/s are observed to be quite similar to the range of values in previous studies, mean local movement speeds as occupants traverse down the stairs are seen to vary widely within a given stairwell, ranging from 0.10 m/s ± 0.008 m/s to 1.7 m/s ± 0.13 m/s. These data provide confirmation of the adequacy of existing literature values typically used for occupant movement speeds and provide updated data for use in egress modeling or other engineering calculations. 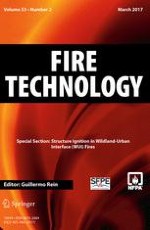 The Use of Fractional Factorial Design for Atrium Fires Prediction

Comparison of the Combustion of Pine Species with Two Sizes of Calorimeter: 10 g vs. 100 g