The process of designing a groundwater monitoring network is a very complicated task which helps to monitor the variation of contaminant factors in groundwater with a minimum number of sampling wells for saving resources and reducing monitoring cost. The uncertainties involved in selecting the initial existing monitoring wells, in absence of primary water quality data, was applied as a basic optimization criteria in this study, which could be quantified using geostatistical estimation error at all the potential monitoring locations. In the proposed methodology, natural contaminants factors (NCF) including; electrical conductivity, total dissolved solid, sodium, chloride, calcium and magnesium and anthropogenic contaminant factors (ACF) including total and fecal Coliforms, nitrate, biological oxygen demand and chemical oxygen demand were applied as selected parameters for optimal designing of monitoring wells based on principal component analysis. Three different optimal monitoring wells scenarios were defined depending on the maximum density of sampling wells for NCF and ACF cases. The efficiency of proposed scenarios was estimated using mass estimation errors and comparison between all the three scenarios of the two different cases. The novel approach was developed by integrating geostatistical and statistical techniques, hydrochemical factors, and potential risk of aquifer to contamination, where optimal number of sampling wells was achieved by eliminating the redundant wells. The results show that the contamination mass detection capacity of around 86 % can be estimated by 114 wells instead of sampling 154 wells in the initial existing monitoring well in the study area, for both natural and anthropogenic contaminations. 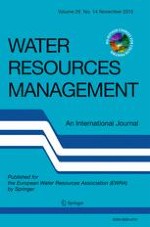