Reservoir operation rules are intended to help an operator so that water releases and storage capacities are in the best interests of the system objectives. In multi-reservoir systems, a large number of feasible operation policies may exist. System engineering and optimization techniques can assist in identifying the most desirable of those feasible operation policies. This paper presents and tests a set of operation rules for a multi-reservoir system, employing a multi-swarm version of particle swarm optimization (MSPSO) in connection with the well-known HEC-ResPRM simulation model in a parameterization–simulation–optimization (parameterization SO) approach. To improve the performance of the standard particle swarm optimization algorithm, this paper incorporates a new strategic mechanism called multi-swarm into the algorithm. Parameters of the rule are estimated by employing a parameterization–simulation–optimization approach, in which a full-scale simulation model evaluates the objective function value for each trial set of parameter values proposed with an efficient version of the particle swarm optimization algorithm. The usefulness of the MSPSO in developing reservoir operation policies is examined by using the existing three-reservoir system of Mica, Libby, and Grand Coulee as part of the Columbia River Basin development. Results of the rule-based reservoir operation are compared with those of HEC-ResPRM. It is shown that the real-time operation of the three reservoir system with the proposed approach may significantly outperform the common implicit stochastic optimization approach. 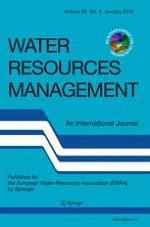 The Impact of Climate Change on Crop Production in West Africa: An Assessment for the Oueme River Basin in Benin

Water Resource Models in the Mekong Basin: A Review

Water Efficiency and the Professional Plumbing Sector: How Capacity and Capability Influence Knowledge Acquisition and Innovation

Model-Based Optimization of Downstream Impact during Filling of a New Reservoir: Case Study of Mandaya/Roseires Reservoirs on the Blue Nile River