Many scientists have recently alarmed natural hazards due to global climate change. Such natural disasters are coastal inundation in response to sea-level rise, and/or river flooding caused by heavy rain falls, additionally earthquakes and, etc. In terms of natural hazards, one of the most sensitive and culturally significant areas in Turkey is the Hatay province in the east Mediterranean region. The Hatay province is located on such a region which is not only vulnerable to coastal inundation and river flooding, but also is a tectonically and seismically sensitive area. In this study, for taking conservation measures against the natural hazards beforehand and decision-making on any future land-planning; a digital terrain model and a 3D fly-through model of the Hatay province were generated; then quantitatively and/or qualitatively interpreted by employing the Shuttle Radar Topographic Mission digital elevation model. Besides, stream drainage patterns, lineaments and structural–geological features were extracted for natural hazard risk interpretation of settlements and their relationships among the landscape characteristics were exhibited by combining tectonic information previously confirmed. Regarding the sea-level rise, the coastal inundation risk map indicates that the most vulnerable areas are: coastlines of Iskenderun, Arsuz, Payas and Samandag, respectively. By/after analyzing the digital terrain of the study region and stream drainage patterns, the Karasu Valley Zone, where the Amik plain, settlements of Antakya, Iskenderun, Arsuz, Payas and Samandag with their flood plains have the most flooding risk in decreasing order, respectively when a heavy raining occurs. Finally, analysis of tectonics has revealed that Antakya, Iskenderun, Hassa, Kirikhan, Samandag, Payas, Arsuz, Altinozu, Kumlu and Hacipasa regions have the most sensitivity to earthquake disaster in the study region. 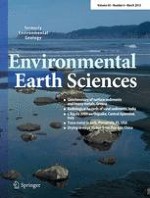