Multicollinearity is one of the most important issues in regression analysis, as it produces unstable coefficients’ estimates and makes the standard errors severely inflated. The regression theory is based on specific assumptions concerning the set of error random variables. In particular, when errors are uncorrelated and have a constant variance, the ordinary least squares estimator produces the best estimates among all linear estimators. If, as often happens in reality, these assumptions are not met, other methods might give more efficient estimates and their use is therefore recommendable. In this paper, after reviewing and briefly describing the salient features of the methods, proposed in the literature, to determine and address the multicollinearity problem, we introduce the Lpmin method, based on Lp-norm estimation, an adaptive robust procedure that is used when the residual distribution has deviated from normality. The major advantage of this approach is that it produces more efficient estimates of the model parameters, for different degrees of multicollinearity, than those generated by the ordinary least squares method. A simulation study and a real-data application are also presented, in order to show the better results provided by the Lpmin method in the presence of multicollinearity.
Anzeige
Vorheriger Artikel The U-shaped relationship between happiness and age: evidence using world values survey data
Nächster Artikel Impact of women empowerment on rural development in Southern Punjab, Pakistan 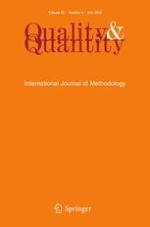 Border is better than distance? Contagious corruption in one belt one road economies

A classification of response scale characteristics that affect data quality: a literature review