Perfectly matched layer (PML) (Berenger 2007) absorbers are now widely used to terminate electromagnetic simulations with an open domain. PMLs suppress reflection and ensure absorption of incident electromagnetic radiation at any angle and any polarization. A variety of PML formulations exist, starting from the early split-field PML (Berenger 1994), and the coordinate stretching approach (Chew and Weedon 1994) up to the convolutional PML (CPML) (Roden and Gedney 2000), and the near PML (NPML) (Cummer 2003). In this paper we refer to the Maxwellian formulation of PML, represented by an artificial material with uniaxial permittivity and permeability tensors, usually termed as uniaxial PML (UPML) (Sacks et al. 1995; Gedney 1996). A PML can be used with both time-domain and frequency domain methods, as well as with finite difference or finite element discretization schemes. It can assume various dispersion models, see e.g. the time-derivative Lorentz material that is capable of absorbing oblique, pulsed electromagnetic radiation having narrow and broad waists (Ziolkowski 1997). A PML can not be applied in some rare cases and for instance it fails to absorb a backward propagating wave for which an adiabatic absorber should be used instead (Zhang et al. 2008; Loh et al. 2009).
Electromagnetic absorbers have a much longer history than any kind of numerical modeling. Their possible applications range from modification of radar echo, through applications related to electromagnetic compatibility, up to photovoltaics. Early real-world absorbers were based on resistive sheets separated from a ground plate by quarter wave distances. With several sheets and multiple resonances it was possible to achieve broadband operation. The idea evolved into the theory of frequency selective surfaces (Munk 2000). Furthermore, it is possible to obtain a tailored impedance at a surface transition region using homogenized periodic one-dimensional or two-dimensional corrugated surfaces (Kristensson 2005). A static periodic magnetization obtained with ferromagnetic or ferrimagnetic materials is another route to obtaining broadband absorbers (Ramprecht and Norgren 2008). A recent overview paper (Watts et al. 2012) can serve as a tutorial on absorbers with the focus on novel metamaterial absorbers based on split-ring and electric-ring resonators.
Anzeige
In this paper we introduce the effective medium PML absorbers (EM-PML), which are metamaterial absorbers with a layered structure that exhibit effective permittivity and permeability tensors similar to a PML material. We calculate the reflection coefficient achieved with these layered absorbers. We look towards their possible physical realizations.

Based on the theoretical considerations and material parameters used to calculate the spatial reflection spectrum in Fig.  5, a simple rule of thumb for the range of required permittivities can be drawn up. This simple rule requires one permittivity to have its real part between \(0\) and \(1\), while the other premittivity would have its real part larger than one. The calculations show, that losses should be provided by the second material (with \(\mathrm{Re}(\epsilon )>1\)), while in the first material we merely neglect gain. Materials in general have \(\mathrm{Re}(\epsilon )>1\), with the exception of localized transitions and broader frequency ranges in metals up to the plasma frequency.
We will now demonstrate the operation of the proposed layered absorber consisting of nonmagnetic layers with no gain. In Fig.  6 we present the results of a finite difference time domain (FDTD) simulation of a layered absorber rolled into a cylindrical core-shell multilayer. The images show the time-averaged energy density distribution obtained for the TE polarization (in Fig.  6a) and TM polarization (in Fig.  6b). Light is incident from the bottom side. The composition of the metamaterial is the same as in Fig.  5c, d, but the multilayer is deposited over a cylindrical metallic (perfectly conducting) material. The absorber consists of \(N=5\) periods of non-magnetic concentric layers, with the radial pitch equal to \(a=0.18\lambda \), the radius of the internal PEC material is equal to \(r_{int}=2 a\), and the external radius is equal to \(r_{ext}=7a\). The permittivities of the layers are equal to \(\varepsilon _{w1}=1.474 + 0.017i\), and \(\varepsilon _{w2}=0.289\), and the filling factor equals \(f=0.6\). Reflections, understood as the part of the energy backscattered to the bottom side of the simulation area are as small as \(R_{TE}=0.05\,\%\), and \(R_{TM}=0.3\,\%\). Thanks to the cylindrical geometry, it is possible to see the operation of the absorber at all possible angles of incidence at the same time. Notably the absorber performs well both for the TE and TM polarization, and in a spherical 3D core-shell geometry where there is no decoupling into these two polarizations we expect similar operation.
×
Finally, we demonstrate the operation of a layered absorber consisting or real materials. Here, we make use of materials with localized electronic transitions. In the mid-infrared \(\hbox {SiO}_2\) is such a material, which features a strong transition at approximately 9  \(\upmu \hbox {m}\) and in a range between 7.2 and \(8\,\upmu \hbox {m}\) its real part of permittivity is between \(1\) and \(0\). The complementary material of choice is NaCl, which in this range has \(\mathrm{Re}(\epsilon )\approx 1.5\), however, it also is weakly dispersive in this range and due to Kramers-Kroning relations between the real and imaginary parts of permittivity it has a very small imaginary part. Thus, \(\hbox {SiO}_2\) needs to provide dissipation to extinguish the incident beam. Deposition of alternating \(\hbox {SiO}_2\) and NaCl or LiF layers of required thickness may be accomplished using such techniques as chemical vapor deposition or thermal evaporation (Fornarini et al. 1999; Kim and King 2007), although with the required total thickness of the layers apporaching a few wavelengths, a fast method is preferable, at least for absorbers intended for infrared.
Fabrication of multilayered shell structures is more challenging, although synthesis of core/shell nanoparticles incorporating \(\hbox {SiO}_2\) or \(\hbox {Al}_2\hbox {O}_3\) and noble metals is commonplace nowadays (Liu et al. 2014; Wang et al. 2014; Mai et al. 2011). In the considered case here, it would be required to synthesize a layered spherical particle consisting of only dielectric materials. As mentioned previously, \(\hbox {SiO}_2\) and \(Al_2\hbox {O}_3\) have been used before, although only in relatively simple synthesis of core-shell structres; magnesium fluoride has also been synthesised in the form of nanoparticles (Lellouche et al. 2012). However, undoubtedly some effort would be required to develop a procedure for the synthesis of layered nanoparticles. In Fig.  7 we present the results obtained for a plane wave incident normally onto a \(\hbox {SiO}_{2}\)/NaCl multilayer designed for the 7–10  \(\upmu \hbox {m}\) wavelength range. The refractive index of the materials is taken from literature (Palik 1985) and the structure is optimized for \(\lambda =8\,\upmu \hbox {m}\). The pitch is equal to \(a=200\) nm, and the filling factor is \(f=0.56\). Due to small losses in glass, the absorption distance is relatively long and reflection smaller than \(1\,\%\) is observed already for 10 layers. In order to achieve both transmission and reflection smaller than \(0.1\,\%\,N=400\) is needed. The thickness can be reduced using materials with larger values of the imaginary part of permittivity.
×
In general, a desired refractive index of one of the layers (in the range \(0<\mathfrak {R}(n)<1\)) can be manufactured using the electromagnetic mixing rules. Recently, absorbers made of hyperbolic metamaterials have been proposed (Guclu et al. 2012) and similar to that material, our multilayer has an elliptical dispersion with a large eccentricity.

We have introduced an approximate representation of the uniaxial perfectly matched layer reflection-free absorber. The representation consists of a one-dimensional stack of uniform and isotropic metamaterial layers. A further simplification to non-magnetic materials with no gain can be assumed for some combinations of filling fraction and absorbing power. We have also shown that similar cylindrical core-shell nanostructures derived from flat multilayers also exhibit very good absorptive and reflective properties. A probable route to implement the absorber experimentally is by using a lossy dielectric as one material and for the other to take a metamaterial, or to make use of electromagnetic mixing rules, or to use some material near its resonance frequency. As an example we have demonstrated a layered absorber for the wavelength of \(8\,\upmu \hbox {m}\) made of \(\hbox {SiO}_2\) and NaCl.
Open AccessThis article is distributed under the terms of the Creative Commons Attribution License which permits any use, distribution, and reproduction in any medium, provided the original author(s) and the source are credited. 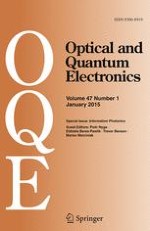