Boundary representation (B-rep) is one of the most common techniques for representing three-dimensional (3D) shapes. In this method, shapes are described mathematically based on the vertices, edges, and faces present. B-rep models are generated using computer-aided design systems and are employed for various purposes in downstream applications, including computer-aided engineering, manufacturing, and inspection. Therefore, the level of detail of the 3D model should be adjusted based on the purpose of use. In this study, we performed multiobjective optimization for the feature-based simplification of B-rep models. The two objectives of the general model simplification process are to minimize the data size and limit the differences in appearance with respect to the original model. To simultaneously meet these objectives, model simplification was performed to minimize both the difference in the volume and the number of faces with respect to those of the original model. For optimization, we used the simple genetic algorithm (SGA) and the non-dominated sorting genetic algorithm II (NSGA-II). The experimental results confirmed that solution set obtained using NSGA-II was of higher quality as compared with those for SGA and the conventional method. 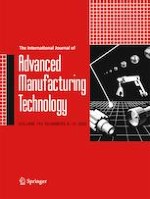 Energy consumption model for cutting operations in a stochastic environment