We propose a multiple-pulse phase-matching quantum key distribution protocol to exceed the linear key rate bound and to achieve higher error tolerance. In our protocol, Alice and Bob generate at first their own pulse train (each train should contain L pulses) as well as random bit sequences and also encode each pulse of their train with a randomized phase and a modulation phase. As the next step, both encoded trains are simultaneously sent to Charlie, who performs an interference detection and may be also an eavesdropper. After a successful detection is announced by Charlie, Alice and Bob open the randomized phase of each pulse and keep only communications when the summation of the difference randomized phases at two success detections’ time stamps for Alice and Bob is equal to 0 or \(\pi \). Thereafter, Alice and Bob compute the sifted key with the time stamps. The above procedure is repeated until both Alice and Bob achieve sufficiently long sifted keys. We can also show that the secret key rate of the proposed QKD protocol can beat the rate-loss limit of so far known QKD protocols when the transmission distance is greater than 150–175 km. Moreover, the proposed protocol has a higher error tolerance, approximately 22.5%, when the transmission distance is 50 km and \(L = 128\). The secret key rate and the transmission distance of our protocol are superior to that of the round-robin differential phase shift quantum key distribution protocol Sasaki et al. (Nature 509:475–480, 2014) and the measurement-device-independent quantum key distribution protocol Lo et al. (Phys Rev Lett 108:130503, 2012), and the secret key rate performance is better in both cases than that of phase-matching quantum key distribution when bit train length is greater than 16. 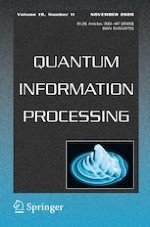 Effect of memory on the violation of Leggett–Garg inequality