Microchannel devices hold the potential to transform many separation processes. This preliminary study investigated the feasibility of incorporating cellulose nanocrystals (CNXLs) into polysulfone, a commonly used ultrafiltration membrane polymer. Incorporating CNXLs into non-water soluble polymers without aggregation has been problematic. A solvent exchange process was developed that successfully transferred an aqueous CNXL dispersion into the organic solvent N-methylpyrrolidone (NMP), which is a solvent for polysulfone (PSf). Films were prepared from the solution of PSf in NMP with dispersed CNXLs by a phase inversion process. Films were then examined by scanning electron microscopy and tested for their transport and mechanical properties. The interaction between the polymer matrix and the CNXL filler was studied by means of thermogravimetric analysis (TGA), which suggested a close interaction between the polymer and filler at the 2% filler loading. The tensile modulus showed a large increase beyond 1% filler loading, which could be due to a percolation effect. The water vapor transport rate increased with increase in filler loading. Agglomeration of the CNXLs seemed to be taking place at filler loadings >7%. 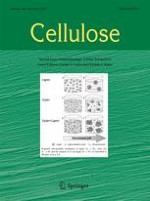