Cellulose nanofibers (CNFs) and nanocrystals (CNCs) were prepared, and used to prepare thin CNF/CNC films. Rheological behavior of CNF/CNC suspensions and the other relevant properties of the films were characterized in comparison with a commercial porous polymer battery separator (PBS) film of similar thickness. The use of mixed CNFs and CNCs in the film-forming suspension led to significant variation of film morphology, and structural properties. With the addition of CNCs in hybrid nanocellulose material, the CNF/CNC suspension viscosity and zeta potential, film tensile strength, crystallinity index, and optical transparency were increased. With the increased CNF loading in the suspension, film porosity, thermal stability, and thermal expansion were enhanced. The CNF/CNC films exhibited better thermal stability, thermal expansion behavior, and optical properties than those of the commercial PBS film. The coefficient thermal expansion of the CNF/CNC and PBS films were 11.86–17.65 and 178.90 ppm/k, respectively. The CNF/CNC films had more uniform strength along all directions, whereas PBS film demonstrated anisotropic property. This work paves a new strategy to tailor the properties of nanocellulose based films. 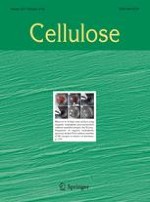 Biodeinking of mixed ONP and OMG waste papers with cellulase