Aerosol-type nanoparticle deposition (NPD) is a magical method to form a dense electroceramic film with a fine, nanoscale structure on a substrate surface by depositing ceramic particles through a nozzle at room temperature. This film has the potential to be applied to various electronic, environmental, and energy devices. However, the deposition mechanism and the nanostructure in the film are not understood sufficiently. This study aimed at investigating the crystal structure of an NPD as-deposited film, and compared the crystal structures of the NPD as-deposited film, annealed film, and the raw powders consisting of particles with diameters of 200 and 50 nm, respectively, using barium titanium oxide (BaTiO3). We found that the crystal in BaTiO3 with a disordered phase due to the Ba displacement within the BaTiO3 was responsible for the adhesion between the BaTiO3 crystalline particles having a diameter of approximately 10 nm, as well as with the substrate. 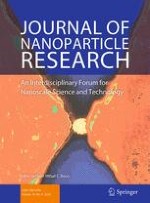