Nanocomposites based on poly(vinylidene fluoride) (PVDF)/poly(methyl methacrylate) (PMMA) with untreated clay were prepared in one step by reactive melt extrusion. Chemical reactions took place between the polymer matrices, the inorganic clay particles, and three reactive agents, leading to the PVDF/PMMA/clay nanocomposites. The microstructure characterizations were carried out by differential scanning calorimetry and wide-angle X-ray scattering (WAXS). The mechanical behavior was investigated by tensile experiments, impact tests, and microhardness measurements. The morphological characterization was carried out by optical and atomic force microscopy (AFM). The decrease of the melting and crystallization temperatures of the PVDF with the increasing PMMA content is attributed to the interactions between the oxygen of the PMMA carbonyl group and the PVDF’s hydrogen atom. WAXS analysis shows that there is neither an intercalation step nor total exfoliation in any composition. As the PMMA content increases, WAXS diagrams show either the PVDF α-crystallographic form, both, α- and β-forms, or only the β-form. For PMMA contents higher than 40 wt%, the materials became amorphous. The microhardness of the samples decrease for a PMMA content up to 20 wt%. The study by optical microscopy and AFM illustrates the significant effect in the presence of clay on the film’s surface morphology. 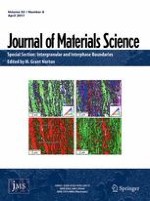 Structural and catalytic properties of Au/MgO-type catalysts prepared in aqueous or methanol phase: application in the CO oxidation reaction