Nanostructure tantalum pentoxide (Ta2O5) has been beforehand illustrated to be a feasible semiconductor material with a large band gap energy of 3.9–4.5 eV, which serve as possible material for ultraviolet (UV) photodetector. However, its full potential as UV sensor was rarely investigated up to this date. Here, a novel UV sensor with low-cost fabrication and higher efficiency was successfully developed which was composed of nanotubular Ta2O5. Nanotubular Ta2O5 was prepared through anodization method with ethylene glycol, NH4F, H2O and H2SO4 acting as electrolyte. The effect of variable concentration of electrolyte and different condition of annealing on nanotubular Ta2O5 were systematically investigated. The UV sensing performance was discovered to be affected by the morphological and structural properties of nanotubular Ta2O5. This study is expected to open the way for the development of large-scale nanotubular Ta2O5 UV sensor with optimum UV responsivity and stability. 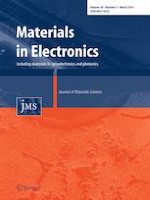 Preparation of modified glassy carbon electrode by the use of titanium oxide, copper and palladium nanoparticles and its application for the electrocatalytic and photelectrocatalytic reduction of hydrogen peroxide