We provide the first evidence for navigation impact on resident river fish in China. The survey was conducted in the East Tiaoxi River that discharges into Lake Taihu near Shanghai, on which cargo ship traffic has dramatically increased in the recent economic development period. Water turbidity, ship traffic and other environmental factors were evaluated at 29 sites on the river. In a multiple regression model with the stepwise method, turbidity was significantly correlated with ship traffic (R 2 = 0.53). Another survey was conducted at 46 sites in the same area of the river, in which environmental factors were evaluated and fish individuals were electrofished. A generalised linear model with the stepwise method was applied to predict ecological indicators of the fish assemblage (species richness, individual density and Shannon’s diversity index) based on environmental factors. The results showed that the indicators were negatively correlated with turbidity and presence of artificial shore embankment structures. Another analysis further showed that the negative effect of turbid water was especially considerable for fish of smaller size. In conclusion, cargo ship traffic has a negative impact on fish assemblage, especially on smaller individuals, in the East Tiaoxi River. A higher profile for conservation actions and consideration of environmental impacts of such traffic should be given increasing focus for this and other similar East Asian water courses. 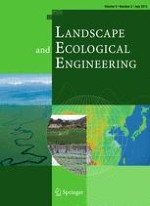