Data streaming is widely used in various environments. Resource-limited devices outsource the processing and storage of massive numbers of sequential elements to cloud-based servers, and security protection is of primary importance for the outsourced streams. The streaming authenticated data structure schemes and verifiable data streaming schemes are introduced to provide data owners and verifiers with the ability to verify streaming elements. However, due to their enormous numbers of key parameters, expensive updating overheads, signature revocation, and other security and application problems, few of the existing schemes are feasible when massive numbers of streaming elements are involved and allowed to be updated. In this paper, we define and construct a new primitive, namely, dimension-increasing vector commitment (DIVC). Then, we present the definition of constant verifiable data streaming (CVDS), which is an extension of the original verifiable data streaming (VDS) scheme. Moreover, with the proposed DIVC scheme, which is based on the CDH assumption in bilinear pairings, we construct two concrete CVDS schemes, namely, the probabilistic verifiability CVDS (P-CVDS) scheme and the deterministic verifiability CVDS (D-CVDS) scheme, by respectively employing the counting Bloom filter and a dynamic accumulator, which is based on the q-SDH assumption in bilinear pairings. The analyses prove that both the P-CVDS and D-CVDS schemes satisfy the security requirements that are formulated in the CVDS definition. Finally, the efficiency and performance evaluation demonstrate that the proposed schemes are feasible in practical applications. 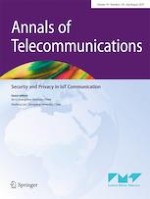 On the rewards of self-adaptive IoT honeypots