The prime objective of this work is to improve our understanding of the shear behavior of rock joints. Attempts are made to relate the peak shear strength of rock joints with its three-dimensional surface morphology parameters. Three groups of tensile joint replicas with different surface morphology are tested with direct shear tests under constant normal load (CNL) conditions. Firstly, the three-dimensional surface characterization of these joints is evaluated by an improved roughness parameter before being tested. Then, a new empirical criterion is proposed for these joints expressed by three-dimensional quantified surface roughness parameters without any averaging variables in such a way that a rational dilatancy angle function is used instead of \({\text{JRC}} \cdot \log_{10} \left( {{{\text{JCS}} \mathord{\left/ {\vphantom {{\text{JCS}} {\sigma_{\text{n}} }}} \right. \kern-\nulldelimiterspace} {\sigma_{\text{n}} }}} \right)\) by satisfying the new peak dilatancy angle boundary conditions under zero and critical-state normal stress (not physical infinite normal stress). The proposed criterion has the capability of estimating the peak shear strength at the laboratory scale and the required roughness parameters can be easily measured. Finally, a comparison among the proposed criterion, Grasselli’s criterion, and Barton’s criterion are made from the perspective of both the rationality of the formula and the prediction accuracy for the three groups of joints. The limitations of Grasselli’s criterion are analyzed in detail. Another 37 experimental data points of fresh rock joints by Grasselli are used to further verify the proposed criterion. Although both the proposed criterion and Grasselli’s criterion have almost equal accuracy of predicting the peak shear strength of rock joints, the proposed criterion is easier and more intuitive from an engineering point of view because of its Mohr–Coulomb type of formulation. 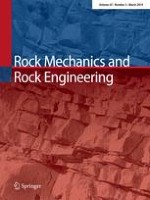 Discussion on “An Empirical Failure Criterion for Intact Rocks” by Peng et al. (2013)