New players in the field: Ecology and biocontrol potential of three species of mollusc-parasitic nematodes of the genus Phasmarhabditis | springerprofessional.de Skip to main content
SUCHE MENÜ 1 2 3 4

Nematodes of the genus Phasmarhabditis are facultative parasites of molluscs with a world-wide distribution but, so far, only one species P. hermaphrodita has been thoroughly studied and developed as a biocontrol agent. Therefore, in the present study, we studied the ecology and biocontrol potential of three species (P. bohemica, P. bonaquaense and P. apuliae). We demonstrate that nematodes can grow in liquid and solid medium but not all the tested bacteria supported the growth of all nematodes. Pseudomonas sp. did not support the growth of P. bonaquaense and P. apuliae grow only in combination with Flavobacterium sp. Yields of dauer juveniles were higher in monoxenic cultures and in liquid medium. Generally, the most productive species was P. bohemica and the highest quality of dauers was reached in association with Flavobacterium sp. The influence of tested nematodes on feeding activity of Deroceras reticulatum and Cepaea hortensis was weak or none, respectively. But the mortality of D. reticulatum was very high both in polyxenic and monoxenic cultures and reached up to 100% within two weeks after treatment. The highest mortality, in average, was observed in P. bonaquaense or in nematodes associated with Flavobacterium sp. Monoxenized nematodes caused higher mortality than polyxenic cultures. C. hortensis was resistant to these nematodes. Our results provide the basis for further development of these nematodes as novel slug control agents.
Anzeige 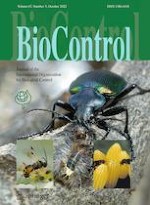 Can the ladybird predator Scymnus nubilus contribute to control of the aphid Aphis frangulae, a pest threatening the Macaronesia endemic Frangula azorica?