There is a strong interest today in concentrated particulate-filled dispersion and slurries in both polymeric and Newtonian fluids. This paper reviews and extends theoretical approaches using percolation theory concepts to characterize the rheological behavior of fluids filled with particulate solids. First, a previously proposed limiting, zero shear viscosity model based on percolation theory concepts is reviewed. This model has been primarily tested with rigid fillers in a Newtonian carrier and polymeric fluids. Second, all Newtonian fluid-based slurries that have a high concentration of filler become pseudoplastic, shear-thinning slurries at some threshold shear rate. A new theory is reviewed and new data are evaluated that correlate the power law constant, n, to cluster formation of the fillers suspended in the fluids in shear flow. Slurry systems reported here cover a size range from 58 nm to 200 μm. Third, this cluster percolation-based rheological analysis is then extended to a newly proposed model for the calculation of the ratio of infinite shear, η∞, to the zero shear viscosity, η0. Using literature data, it is demonstrated that measurements of the viscosity ratio, η∞/η0, correlate with the power law through the use of an energy dissipation-based model for Bingham rheological fluids. 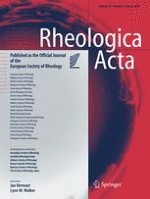 On the oscillating shear rheometry of magnetorheological elastomers