The stable isotope nitrogen-15 (15N) is a robust indicator of nitrogen (N) source, and the joint use of δ15N and δ18O–NO3 − values can provide more useful information about nitrate source discrimination and N cycle process. The δ15N and δ18O–NO3 − values, as well as major ion tracers, from Taihu Lake in east China were investigated to identify the primary nitrate sources and assess nitrate biogeochemical process in the present study. The results show that the nitrate concentration in West Taihu Lake (WTL) was generally higher than those in East Taihu Lake (ETL) and its upstream inflow rivers. The NO3 −/Cl− value combined with mapping of δ15N–NO3 − and NO3 − concentration suggest that the mixing process should play a major effect in WTL, and denitrification was the dominant N transformation process in WTL. A linear relationship of close to ~1: 2 was observed between δ15N–NO3 − and δ18O–NO3 − values in WTL, confirming the occurrence of denitrification in WTL. The δ15N–NO3 − data imply that sewage and manure were the principal nitrate sources in WTL and its feeder rivers, while the nitrate in ETL might derive from soil organic nitrogen and atmospheric deposition. The δ18O–NO3 − data indicate most of nitrate from microbial nitrification of organic nitrogen matter possibly make a significant contribution to the lake. 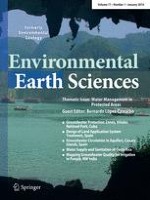 Building a 3D geomodel for water resources management: case study in the Regional Park of the lower courses of Manzanares and Jarama Rivers (Madrid, Spain)