The effects of noise on patterns and collective phenomena are studied in a small-world neuronal network with the dynamics of each neuron being described by a two-dimensional Rulkov map neuron. It is shown that for intermediate noise levels, noise-induced ordered patterns emerge spatially, which supports the spatiotemporal coherence resonance. However, the inherent long range couplings of small-world networks can effectively disrupt the internal spatial scale of the media at small fraction of long-range couplings. The temporal order, characterized by the autocorrelation of a firing rate function, can be greatly enhanced by the introduction of small-world connectivity. There exists an optimal fraction of randomly rewired links, where the temporal order and synchronization can be optimized. 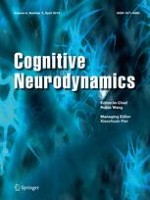 Is replenishment of the readily releasable pool associated with vesicular movement?

A review of EEG and MEG for brainnetome research