The effect of noise on the pattern selection in a regular network of Hodgkin–Huxley neurons is investigated, and the transition of pattern in the network is measured from subexcitable to excitable media. Extensive numerical results confirm that kinds of travelling wave such as spiral wave, circle wave and target wave could be developed and kept alive in the subexcitable network due to the noise. In the case of excitable media under noise, the developed spiral wave and target wave could coexist and new target-like wave is induced near to the border of media. The averaged membrane potentials over all neurons in the network are calculated to detect the periodicity of the time series and the generated traveling wave. Furthermore, the firing probabilities of neurons in networks are also calculated to analyze the collective behavior of networks. 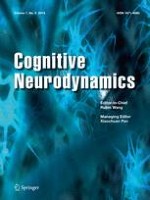 A computational neural model of orientation detection based on multiple guesses: comparison of geometrical and algebraic models