Flow machines are widely used in industry through devices such as hydraulic turbines and pumps. Most part of these devices work with newtonian fluids, however, there are some specific devices dedicated to work with non-newtonian fluids, such as blood pumps. The main function of a blood pump is to have a suitable hydraulic performance while maintaining good haematological compatibility which consists of avoiding hemolysis (release of hemoglobin from red blood cells) and thrombosis (clotting). However, the challenge of improving the performance of these non-newtonian fluid machines requires the solution of an inverse-based design optimization problem, in which an oriented search must be conducted to obtain the optimized design. The rotor is a main component in the non-newtonian pump and the design of rotor topology can play an important role in the pump performance and its haematological conditions. Thus, performance improvement of these devices can be achieved by using topology optimization techniques. The optimization of pump hydraulic performance can be achieved by minimizing dissipative energy and power consumption and for the improvement of the haematological conditions, it is proposed to minimize the vorticity. Thus, in this work, topology optimization techniques are applied for designing the rotor pump such that the energy dissipation, vorticity, and power consumption are minimized considering non-Newtonian fluid. A two-dimensional finite element derived for a rotating frame is applied to model the rotor flow behavior. The modeling predicts the flow field between relative two blades of a rotor without considering the influence of the volute. A modified Cross model is adopted for the non-Newtonian fluid modeling. It is assumed that the fluid is flowing an idealized porous medium subjected to a friction force, which is proportional to the fluid velocity and the inverse local permeability. A porous flow model is considered with a continuous (gray) permeability design variable for each element that defines the local permeability of the medium and allows the transition between fluid and solid property. The design optimization problem is solved by using the method of moving asymptotes (MMA). Numerical examples are presented to illustrate this methodology aiming blood pump applications. A comparison among designs obtained by considering newtonian and non-newtonian fluid is included. Finally, it is verified that an improvement of the hemolysis index can be achieved by minimizing the vorticity in the rotor. 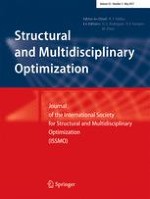