» Jetzt Zugang zum Volltext erhalten
Wichtige Hinweise
Communicated by Willi Meier.
This is a substantially revised and extended version of the papers [16] of FSE 2011 and [28] of SAC 2011. Sects. 2 and 3 are based on Ref. [28], with major revision in Lemma 1 and a generalization in Theorem 1, along with substantial new contributions in Sect. 2. Section 4.2 is based on Ref. [16] with major revision in the proof of Theorem 14. Section 2.2, Theorem 6 of Sect. 2.3, and Sects. 4.1 and 4.3 are completely new technical contributions in this paper.

RC4 has been the most popular stream cipher in the history of symmetric key cryptography. Its internal state contains a permutation over all possible bytes from 0 to 255, and it attempts to generate a pseudo-random sequence of bytes (called keystream) by extracting elements of this permutation. Over the last twenty years, numerous cryptanalytic results on RC4 stream cipher have been published, many of which are based on non-random (biased) events involving the secret key, the state variables, and the keystream of the cipher.
Though biases based on the secret key are common in RC4 literature, none of the existing ones depends on the length of the secret key. In the first part of this paper, we investigate the effect of RC4 keylength on its keystream, and report significant biases involving the length of the secret key. In the process, we prove the two known empirical biases that were experimentally reported and used in recent attacks against WEP and WPA by Sepehrdad, Vaudenay and Vuagnoux in EUROCRYPT 2011. After our current work, there remains no bias in the literature of WEP and WPA attacks without a proof.
In the second part of the paper, we present theoretical proofs of some significant initial-round empirical biases observed by Sepehrdad, Vaudenay and Vuagnoux in SAC 2010.
In the third part, we present the derivation of the complete probability distribution of the first byte of RC4 keystream, a problem left open for a decade since the observation by Mironov in CRYPTO 2002. Further, the existence of positive biases towards zero for all the initial bytes 3 to 255 is proved and exploited towards a generalized broadcast attack on RC4. We also investigate for long-term non-randomness in the keystream, and prove a new long-term bias of RC4. 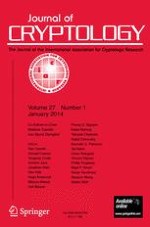 Erratum to: A Comparison of Cryptanalytic Tradeoff Algorithms

A One-Time Stegosystem and Applications to Efficient Covert Communication