Residual axial capacity from numerical analysis was widely used as a critical indicator for damage assessment of reinforced concrete (RC) columns subjected to blast loads. However, the convergence of the numerical result was generally based on the displacement response, which might not necessarily generate the correct post-blast results in case that the strain softening behavior of concrete was considered. In this paper, two widely used concrete models are adopted for post-blast analysis of a RC column under blast loading, while the calculated results show a pathological mesh size dependence even though the displacement response is converged. As a consequence, a nonlocal integral formulation is implemented in a concrete damage model to ensure mesh size independent objectivity of the local and global responses. Two numerical examples, one to a RC column with strain softening response and the other one to a RC column with post-blast response, are conducted by the nonlocal damage model, and the results indicate that both the two cases obtain objective response in the post-peak stage. 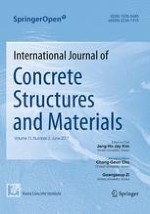