There is a set of applications in wireless sensor networks that forms a particular topology through specific placements of sensor nodes. This set is known as linear infrastructure or one dimensional network. Applications of such networks are subway tunnel or pipeline monitoring and perimeter surveillance. These applications often demand critical security concerns. Distribution of symmetric keys for such networks is different from those that are planner and are widely studied. By considering requirements for such linear infrastructure in detail, we observe that connectivity is an important issue as capturing a single node disrupts the entire network’s services. Therefore, we propose a new measure of connectivity that produces the optimal results with acutely lightweight key predistribution schemes (KPS). We also show the theoretical analysis of our proposed scheme and prove how it produces optimal results with lesser storage requirements as compared to other schemes. The performance analysis shows that the proposed KPS requires lesser number of keys per node (O(1) constant storage), as compared to the other existing schemes in the literature to provide the same level of connectivity. 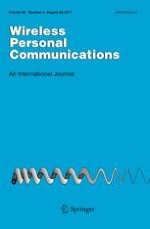 A Novel Cooperative Communication System Based on Multilevel Convolutional Codes