» Zum Volltext PDF-Version jetzt herunterladen
Wichtige Hinweise
This work was financially supported by the Federal Ministry of Education and Research (BMBF) in context of the ‘INKA’ project (Grand Number 03IPT7100X and by EFRE funding in context of the ego.-INKUBATOR program (ZS/2016/09//81061/IK 01/2015)).

Contact endoscopy (CE) is a minimally invasive procedure providing real-time information about the cellular and vascular structure of the superficial layer of laryngeal mucosa. This method can be combined with optical enhancement methods such as narrow band imaging (NBI). However, these techniques have some problems like subjective interpretation of vascular patterns and difficulty in differentiation between benign and malignant lesions. We propose a novel automated approach for vessel pattern characterization of larynx CE + NBI images in order to solve these problems.

In this approach, five indicators were computed to characterize the level of vessel’s disorder based on evaluation of consistency of gradient and two-dimensional curvature analysis and then 24 features were extracted from these indicators. The method evaluated the ability of the extracted features to classify CE + NBI images based on the vascular pattern and based on the laryngeal lesions. Four datasets were generated from 32 patients involving 1485 images. The classification scenarios were implemented using four supervised classifiers.

These promising results show that the proposed method could solve the problem of subjectivity in interpretation of vascular patterns and also support the clinicians in the early detection of benign, pre-malignant and malignant lesions. 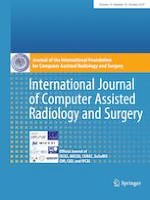 Correction to: On the reproducibility of expert-operated and robotic ultrasound acquisitions