In this work, passive nonlinear targeted energy transfer (TET) is addressed by numerically and experimentally investigating a lightweight rotating nonlinear energy sink (NES) which is coupled to a primary two-degree-of-freedom linear oscillator through an essentially nonlinear (i.e., non-linearizable) inertial nonlinearity. It is found that the rotating NES passively absorbs and rapidly dissipates a considerable portion of impulse energy initially induced in the primary oscillator. The parameters of the rotating NES are optimized numerically for optimal performance under intermediate and strong loads. The fundamental mechanism for effective TET to the NES is the excitation of its rotational nonlinear mode, since its oscillatory mode dissipates far less energy. This involves a highly energetic and intense resonance capture of the transient nonlinear dynamics at the lowest modal frequency of the primary system; this is studied in detail by constructing an appropriate frequency–energy plot. A series of experimental tests is then performed to validate the theoretical predictions. Based on the obtained numerical and experimental results, the performance of the rotating NES is found to be comparable to other current translational NES designs; however, the proposed rotating device is less complicated and more compact than current types of NESs. 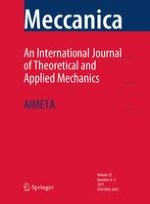 Some observations on Bar Sinai, Brener and Bouchbinder (BSBB) model for friction