This research used the finite element method (FEM) to investigate the influence of the slope of grain (SoG) on the strength-reducing effect of face knots. The results showed that the SoG may reduce the modulus of rupture (MoR) of knotty beams by up to 50 %. In addition, this negative influence was found to be markedly dependent upon both the knot position and the side of the specimen where the SoG is perceptible. Centerline knots were more susceptible to the SoG influence than margin knots. For the face knots, this effect also became worse when accounting for the SoG at faces (SoGf) in comparison to the edges (SoGe). The worst case scenario occurred however, when both the SoGf and SoGe were assumed. Further investigations are suggested to improve timber efficiency as current lumber grading standards do not discern these features.

Titel
Numerical calculations of the influence of the slope of grain on the effect of knots
Autoren:
Pablo Guindos
Tiberiu Polocoser 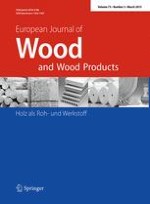 Understanding the consumer: Multi-modal market research on consumer attitudes in Germany towards lightweight furniture and lightweight materials in furniture design