Piled foundations are frequently subjected to simultaneous axial and lateral loadings. However, the interaction effects of the one loading on the other are, in most cases, disregarded for the sake of simplicity. With the aim of evaluating this effect, a detailed research work on the response of a single pile under simultaneous application of axial and lateral loading was carried out. A qualitative assessment of the effect was initially attempted and the effect was afterwards quantified, based on the results of an intensive three-dimensional parametric numerical analysis. The influence arising from pile head fixity and the second order phenomenon was examined, while the post-peak behaviour was also considered using a strain hardening/softening constitutive law. Interesting conclusions have been drawn, providing a qualitative and quantitative evaluation of the effect on clayey and sandy soils. It was also found that no loading interaction effect is developed, when ultimate limit state is applied for a piled foundation design. On the contrary, when the serviceability limit state is applied and if the pile capacity in both lateral and axial loading is simultaneously reached, a reduction in the pile axial capacity is observed in the case of clayey soils. On the contrary, in the case of sandy soils the action of a lateral load is leading to an increase of pile axial capacity. 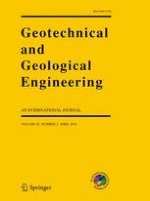