In this paper, a three-dimensional enthalpy–porosity mixture solidification model is employed to describe the basic rules of heat transfer and solidification in a twin-roll strip continuous casting machine equipped with a multi-port trough-shaped feeding system, and reasons for the formation of these rules are analyzed. The two-layer zonal turbulence model is used to incorporate the turbulence in fluid flow, and the fluid flow in the wedge-shaped pool region in various conditions is studied. The results show that the fluid flow field in the pool region is quite different with/without the consideration of rotating rolls when the solidification is ignored, which indicates the importance of the consideration of rotating rolls in the water modeling equipment design. There are three aspects including molten steel jet impingement, roll rotating, and backward flow of the mushy zone, which strongly influence the temperature distribution in the pool region. The solidification process in the pool region could be divided into three stages: at the first stage, there exists a fast solidification region which obeys the square root law, and an approximately linear growth region could be found at the second stage, while a parabolic growth region could be found at the last stage. The formation of the first stage and the last stage could be mainly due to the geometry of the feeding system and the backward flow of the mushy zone, respectively. The first stage of solidification could be modified by a better designed feeding system, but the backward flow of mushy zone determined by the properties of metals and casting parameters could be one of the biggest obstacles for commercial production of steel sheets by a twin-roll caster. 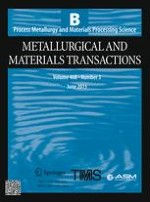