A large number of statistics indicate that water inrush has a direct relationship with geological structures such as fault and karst collapse columns. Understanding the mechanism of water inrushes controlled by geologic structures is of vital importance for adopting effective measures to prevent their occurrence. The work begins with formulization of a damage-based hydromechanical model based on elastic damage theory. Next, the model is numerically implemented with finite element method by employing a finite element package called COMSOL Multiphysics, and is also validated against some existing experimental observations. Finally, the model is used to simulate the mining-induced groundwater inrushes when the effect of faults and karst collapse columns is considered in the numerical simulation, and some suggestive conclusions for preventing water inrushes and optimizing underground mining operations are drawn. 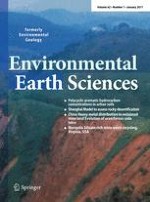 Isolation and degradation ability of the DDT-degrading bacterial strain KK

Kita-Uebaru natural rock slope failure and its back analysis