An investigation into the hot tear susceptibility of ternary Al-Si-Mg alloys has been made using direct crack observation, measurement of load response, and predictions made by a modified Rappaz-Drezet-Gremaud (RDG) hot tearing model. A peak in both the hot tear susceptibility and the load at solidus occurred at approximately 0.2Si and 0.15Mg, and then the hot tear susceptibility decreased as the total solute content increased. In general, a good correlation was found among the observation of cracks, the load at solidus, and the predictions of the RDG hot tearing model, although it was shown that correlation with the RDG model depended critically on the fraction solid at which solid coalescence was assumed to occur. A combination of these approaches indicated that when the total Si+Mg content and the Si:Mg ratio increased toward four, a decrease occurred in the hot tear susceptibility because of an increase in the amount of final eutectic formed. At the lowest Si:Mg ratio of 0.25, the RDG model also predicted a lower relative hot tear susceptibility than that measured by the load at solidus. In these alloys, the final stages of solidification are predicted to occur over a large temperature range, and hence, both the predictions of the RDG model and the measurement of the load were dependent on which fraction solid was chosen for grain coalescence. In the alloys studied in this article, the formation of small amounts of the ternary eutectic Al+Mg2Si+Si caused the highest hot tear susceptibility.
Anzeige
Vorheriger Artikel Surface Preparation of Powder Metallurgical Tool Steels by Means of Wire Electrical Discharge Machining
Nächster Artikel Directional Solidification and Microsegregation in a Magnesium-Aluminum-Calcium Alloy 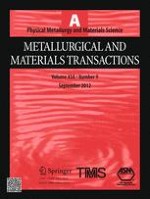 On the Distinction Between Plasticity- and Roughness-Induced Fatigue Crack Closure