Two years of radon-222 observations collected at L’Aquila (Italy) in the atmospheric surface layer during 2004–2006 were analyzed in correlation with meteorological data and other atmospheric tracers. A box model was developed to better understand the mechanisms of diurnal and seasonal variability of the tracer and to indirectly assess the magnitude of the monthly averaged radon soil flux in the L’Aquila measurement site. The model was successfully validated with measurements, with a 0.8 average correlation coefficient between hourly values for the whole period of radon observations. Measurements taken during March 2009 were analyzed to find possible signs of perturbation due to the ongoing seismic activity that would have reached its peak on the 6 April 2009 destructive earthquake. Contrary to the professed (and unpublished) dramatic increases of radon activity unofficially announced to the inhabitants at that time, the study presented here shows that no radon activity increase took place in L’Aquila with respect to a previous ‘seismically unperturbed’ year (same month with similar meteorological conditions), but that an average 30 % decrease was experienced. This conclusion is reached from a direct comparison of observed data and also as a result of the previously validated radon box model constrained by actual meteorological data, from which an indirect estimate of a 17 % reduction of the radon soil flux is obtained. 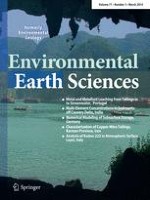 Mapping hotspots of underground water quality based on the variation of chemical concentration in Amman, Zarqa and Balqa regions, Jordan