The importance and necessity of analytically evaluating the performances of IEEE802.11 wireless networks in non-saturation mode have increasingly been emphasized. Unfortunately, very few such works have been conducted due to the analytical complexity of high-dimensional stochastic processes. Bae et al. (Ann Oper Res 162:3–18, 2008) modelled the dynamics of the non-saturation mode IEEE802.11 distribution coordination function using a 3-dimensional Markovian process and computed the stationary probability distribution by the matrix analytic method. However, their computation procedure requires a large calculation complexity because of the explosion of the state space and iteration algorithms. In this paper, we originally apply the spectral method to derive the stationary probability distribution and mean HoL-delay time for the IEEE802.11 model in Bae et al. (2008). Our study shows that the spectral method is a very efficient technique in performance analyses of the queueing systems such as IEEE802.11 and IEEE802.16 wireless networks. 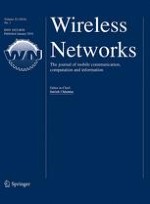 Performance study of a CSMA based multiuser MAC protocol for cognitive radio networks: analysis of channel utilization and opportunity perspective

A review on energy efficient protocols in wireless sensor networks