Virtualization is the cornerstone of the developing third-party compute industry, allowing cloud providers to instantiate multiple virtual machines (VMs) on a single set of physical resources. Customers utilize cloud resources alongside unknown and untrusted parties, creating the co-resident threat—unless perfect isolation is provided by the virtual hypervisor, there exists the possibility for unauthorized access to sensitive customer information through the exploitation of covert side channels. This paper presents co-resident watermarking, a traffic analysis attack that allows a malicious co-resident VM to inject a watermark signature into the network flow of a target instance. This watermark can be used to exfiltrate and broadcast co-residency data from the physical machine, compromising isolation without reliance on internal side channels. As a result, our approach is difficult to defend against without costly underutilization of the physical machine. We evaluate co-resident watermarkingunder a large variety of conditions, system loads and hardware configurations, from a local laboratory environment to production cloud environments (Futuregrid and the University of Oregon’s ACISS). We demonstrate the ability to initiate a covert channel of 4 bits per second, and we can confirm co-residency with a target VM instance in \(<\)10 s. We also show that passive load measurement of the target and subsequent behavior profiling is possible with this attack. We go on to consider the detectability of co-resident watermarking, extending our scheme to create a subtler watermarking attack by imitating legitimate cloud customer behavior. Our investigation demonstrates the need for the careful design of hardware to be used in the cloud. 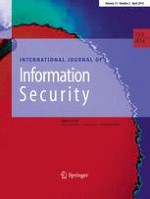 Enhanced GeoProof: improved geographic assurance for data in the cloud

BlindIdM: A privacy-preserving approach for identity management as a service