In this paper, I take a critical stance on the emerging field of nanoethics. After an introductory section, “Conceptual Foundations of Nanotechnology” considers the conceptual foundations of nanotechnology, arguing that nanoethics can only be as coherent as nanotechnology itself and then discussing concerns with this latter concept; the conceptual foundations of nanoethics are then explicitly addressed in “Conceptual Foundations of Nanoethics”. “Issues in Nanoethics” considers ethical issues that will be raised through nanotechnology and, in “What’s New?”, it is argued that none of these issues is unique to nanotechnology. In “It’s a Revolution!”, I express skepticism about arguments which hold that, while the issues themselves might not be unique, they nevertheless are instantiated to such a degree that extant moral frameworks will be ill-equipped to handle them. In “What’s Different?”, I draw plausible distinctions between nanoethics and other applied ethics, arguing that these latter might well identify unique moral issues and, as such, distinguish themselves from nanoethics. Finally, in “What Now?”, I explore the conclusions of this result, ultimately arguing that, while nanoethics may fail to identify novel ethical concerns, it is at least the case that nanotechnology is deserving of ethical attention, if not a new associative applied ethic.

Titel
On the Autonomy and Justification of Nanoethics
Autor:
Fritz Allhoff 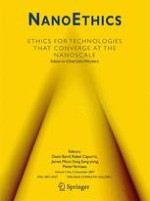 A Question of Balance or Blind Faith?: Scientists’ and Science Policymakers’ Representations of the Benefits and Risks of Nanotechnologies

Challenges in the Evaluation of Nanoscale Research: Ethical Aspects