On the Expressive Power of Some Extensions of Linear Temporal Logic | springerprofessional.de Skip to main content
TOOLBAR 1 2 3 4
SUCHE MENÜ 1 2 3 4

One of the most simple models of computation suitable for representation of reactive systems behavior is a finite state transducer that operates on an input alphabet of control signals and an output alphabet of basic actions. The behavior of such a reactive system displays itself in the correspondence between the flow of control signals and sequence of basic actions performed by the system. We believe that the behavior of this kind requires more complex and expressive means of specifications than the conventional linear temporal logic (\(LTL\)). In this paper, we define a new language of formal specifications \(\mathcal{L}\mathcal{P}\)-\(LTL\), which is an extension of LTL, specifically intended for describing the properties of transducer computations. In this extension, the temporal operators are parameterized by sets of words (languages) which describe flows of control signals that impact on a reactive system. Basic predicates in the ℒ𝒫-LTL formulas are also defined by the languages in the alphabet of basic actions; these languages describe the expected response of the system to the environmental influences. In our earlier papers, we considered a verification problem for finite state transducers with regard to specifications represented by the ℒ𝒫-\(LTL\) and ℒ𝒫-\(CTL\) formulas. It was shown that the problem is algorithmically solvable for both logics. The aim of this paper is to estimate the expressive power of ℒ𝒫-\(LTL\) by comparing it with some well-known logics widely used in computer science for specification of reactive systems. Two fragments were isolated in the ℒ𝒫-LTL: ℒ𝒫-1-LTL and ℒ𝒫-n-LTL. We discovered that the specification language of ℒ𝒫-1-\(LTL\) is more expressive than LTL, while the ℒ𝒫-n-\(LTL\) fragment has the same expressive power as the monadic second order logic S1S.

Titel
On the Expressive Power of Some Extensions of Linear Temporal Logic
Autoren:
A. R. Gnatenko
V. A. Zakharov 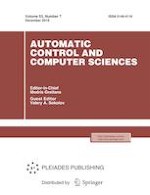 Computer Simulation of a Smart Building