» Zur Zusammenfassung PDF-Version jetzt herunterladen
Wichtige Hinweise
We thank Peter Kort, as well as seminar participants at the 15th Annual International Conference on Real Options in Turku, Finland, the University of York, Hull University Business School, and the INFORMS Annual Meeting in San Francisco for helpful comments. We gratefully acknowledge the helpful comments received from the Editor (Riedel) and two anonymous referees. All errors are ours.

2 Optimal use of short-time work by firms

As mentioned in Sect.  1, the details of STW measures vary substantially across countries, although the main idea is the same: employers can put staff on reduced hours, while the government partially compensates for lost wage earnings. In this section we will study the effect of STW on the firm’s liquidation decision. The main idea of our model is that STW provides the firm with an option to postpone an irreversible liquidation decision by lowering its production level, which reduces its (stochastic) revenues as well as its (deterministic) costs. This generates a trade-off for the firm where STW is attractive when its sales price is low, but not when it is high; an assumption that we will formalize below (cf. Assumption  1). As far as the details of the STW measure, we make the following additional simplifying assumptions. First the firm can use STW only once, second the option to use STW is infinitely lived, third the use of STW does not involve sunk costs and fourth the firm can decide itself when to stop STW.
The second and third assumptions are, arguably, the most unrealistic ones. Both are made for technical convenience and can be relaxed. However, when options are not infinitely lived no analytical results can be obtained, although it has been shown that even for moderate finite life times the (numerically obtained) solutions are very similar to those obtained analytically under an infinite time horizon [ 11]. The assumption that the use of STW does not involve sunk costs implies that a firm will use STW sooner than in the case that sunk costs are present. The result that sunk costs delay investment is standard in the literature 2 and the same intuition applies here as well.
Our assumptions imply that the firm has three subsequent options. First the option to enter STW. Second, once entered, the firm has the options to (i) exit STW and return to normal production, or (ii) to liquidate. Third, if the firm decided to exit STW and return to normal production, then it now has an option to liquidate. Since our stochastic process will be strongly Markovian, we can value these three options successively, starting with the final one.

2.1 The value of an active firm that has already used STW

2.2 The value of a firm currently using STW

2.3 The value of an active firm that has not yet used STW

3 The effect of short-time work on liquidation probabilities

In this paper we studied a firm that can make use of a short-time work programme. Using a real options approach we derived the optimal thresholds for the firm to adopt STW and, once entered, when to exit and revert to normal production levels, or to liquidate. The liquidation threshold is computed both when the firm is using STW and when it is not. We show that a firm that is using STW will liquidate later than a firm that is not using it.
In practice, details of STW are highly variable between (OECD) countries. Our numerical computations are based on three different scenarios. One takes the STW details as they are common in Northern European countries. The second scenario looks at the way STW has been implemented typically in Anglo-Saxon countries. We take the point of view of a government and calculate the benefits to society of STW by a dynamic benefit-to-cost ratio and find that the dBCR is typically very small and far below unity. This happens because the benefits of STW accrue later in time than when the costs are incurred and are, thus, discounted more. This shows the importance of a stochastic dynamic approach to analysing such measures.
We also study the value of STW to different stakeholders in the firm. It turns out that workers are actually the worst off. STW is better for capitalists and shareholders. This happens because STW extends the life of the firm, so that capitalists get fully paid throughout that time while workers receive lower wages. Shareholders benefit through the option value that is generated by the presence of STW. We suggest that a “pay holiday” on capital goods payments could lead to similar results as STW but would protect the worker more. This suggests that a balanced approach may provide a better balance between costs and benefits of STW.
We list three possible extensions of this research. First, it would be interesting to make the duration that the firms can use STW time dependent. With such a model one could calculate the optimal duration of the programme both from a firm’s and society perspective. Second, one could investigate what the effect would be from the possibility to make use of the programme more than once. Would firms adopt STW earlier? Would they exit earlier? Would this be beneficial for society? Third, it could be interesting to study the effect of STW in a competitive setting. How is the entry threshold of one firm affected by actions of other firms? What if a firm is in competition with another firm that is based in a country where STW measures do not exist? Finally, this paper has not addressed the effect of STW on the labour market. An important question to be asked is whether STW unfairly advantages workers employed in firms that have access to STW over workers who are not.
Open AccessThis article is licensed under a Creative Commons Attribution 4.0 International License, which permits use, sharing, adaptation, distribution and reproduction in any medium or format, as long as you give appropriate credit to the original author(s) and the source, provide a link to the Creative Commons licence, and indicate if changes were made. The images or other third party material in this article are included in the article’s Creative Commons licence, unless indicated otherwise in a credit line to the material. If material is not included in the article’s Creative Commons licence and your intended use is not permitted by statutory regulation or exceeds the permitted use, you will need to obtain permission directly from the copyright holder. To view a copy of this licence, visit http://creativecommons.org/licenses/by/4.0/.

Appendix A: Proof of Proposition 2

Appendix B: Proof of Proposition 3 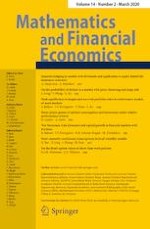