The nanowires grown on GaAs semiconductor substrate play very important roles in nanoelectronics, optoelectronics, and sensors. The nanowires can be produced by many methods among the existing methods of nanowires growth on GaAs semiconductor, the vapor–liquid–solid (VLS) method appears to be simple, low cost, and popular. However, this method in practice requires further investigations concerning the growth mechanisms, size effects, and the role of Au catalyst metal diffusion, as well as the effect of technological conditions. Several undesired phenomena, which strongly influence the morphologies, features, and applications of the grown nanowires, can occur as the result of using thick Au catalyst layers, high growth temperatures, and/or small vapor volume in the closed ampoule. This paper aims to examine simultaneous formation of voids, etched holes, and GaO particles along with the nanowires grown by VLS method on GaAs substrate. As the result, typical technological conditions for the nanowires growth with better characterizations are proposed. 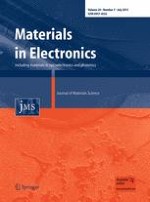