On the Relationship Between Dislocation Creep Strength and Microstructure of a Solid-Solution-Strengthened Ni-Base Superalloy | springerprofessional.de Skip to main content
TOOLBAR 1 2 3 4
SUCHE MENÜ 1 2 3 4

It is shown that the dislocation creep strength of a solid-solution-strengthened Ni-base superalloy is critically dependent upon the cooling rate from the annealing temperature. This behavior is correlated with the effect of cooling rate on the morphology of M23C6-type carbide which precipitates at grain boundaries during cooling. Experiment shows that the creep strength is enhanced by rapid cooling which results in discrete carbide particles with irregular shape following a zigzag path along the grain boundaries. However, the creep strength is degraded as the morphology is changed into lamellar type by a discontinuous grain boundary reaction which occurs during slower cooling rates. Due to the transition from the discrete particle into the lamellar morphology, plastic deformation becomes more localized alongside the grain boundaries which accelerates the creep rate leading to premature intergranular failure. On the other hand, it is also shown that the stacking fault energy of the alloy increases with temperature which can allow dislocations to rearrange themselves into subgrain structure with relative ease during steady-state creep.

Titel
On the Relationship Between Dislocation Creep Strength and Microstructure of a Solid-Solution-Strengthened Ni-Base Superalloy
Autor:
H. M. Tawancy 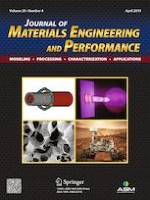