This work is concerned with the characterization of the statistical dependence between the components of random elasticity tensors that exhibit some given material symmetries. Such an issue has historically been addressed with no particular reliance on probabilistic reasoning, ending up in almost all cases with independent (or even some deterministic) variables. Therefore, we propose a contribution to the field by having recourse to the Information Theory. Specifically, we first introduce a probabilistic methodology that allows for such a dependence to be rigorously characterized and which relies on the Maximum Entropy (MaxEnt) principle. We then discuss the induced dependence for the highest levels of elastic symmetries, ranging from isotropy to orthotropy. It is shown for instance that for the isotropic class, the bulk and shear moduli turn out to be independent Gamma-distributed random variables, whereas the associated stochastic Young modulus and Poisson ratio are statistically dependent random variables. 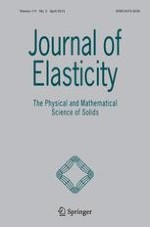 Kinematics of Hypersurfaces in Riemannian Manifolds