In this paper, we propose a new online apnea–bradycardia detection scheme that takes into account not only the instantaneous values of time series, but also their temporal evolution. The detector is based on a set of hidden semi-Markov models, representing the temporal evolution of beat-to-beat interval (RR interval) time series. A preprocessing step, including quantization and delayed version of the observation vector, is also proposed to maximize detection performance. This approach is quantitatively evaluated through simulated and real signals, the latter being acquired in neonatal intensive care units (NICU). Compared to two conventional detectors used in NICU, our best detector shows an improvement on average of around 15 % in sensitivity and 7 % in specificity. Furthermore, a reduced detection delay of approximately 2 s is also observed with respect to conventional detectors. 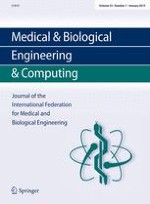