Atomic switches are nanoionic devices that are operated by controlling redox reactions and the local migration of metal ions in solids. The essential mechanism is the growth and shrinkage of a metal filament formed between two electrodes, resulting in repeatable resistive switching between high-resistance and low-resistance states, which can be used for next-generation nonvolatile memories. This review focuses on the operating mechanism and resistive switching characteristics of two- and three-terminal atomic switches using a thin metal oxide layer as an ion-conducting matrix. First, we describe the operating mechanism of a two-terminal atomic switch based on nucleation theory and present the results of temperature dependence and switching speeds to determine the validity of our switching model. Then, we discuss the effects that moisture absorption in the oxide matrix has on the fundamental processes and switching behavior in order to elucidate the importance of the porosity of the oxide matrix. Finally, we demonstrate a three-terminal atomic switch and describe the impact of the anode material or metal-ion species. These findings will contribute to the development of next-generation logic circuits with low-voltage operation and low-power consumption. 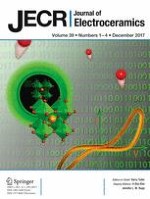 Review of mechanisms proposed for redox based resistive switching structures