Boron doped NiO films were prepared by sol–gel method. The effects of B content on the morphological and optical properties of NiO films were studied with atomic force microscopy, and optical characterization method. The average transmittance at the visible region is reached to 75 % for lower doped films (0.1 and 0.2 % B), whereas, the recorded average value of transmittance was about 62 % for doped film with 1 % B throughout the region. The optical energy gap value for pure NiO film was found to be 3.73 eV. These values were affected by B doping with non-monotonic variation and reached to 3.64 eV for 0.1 % B doped NiO. Also, the refractive index dispersion and dielectric constants of the NiO films were studied throughout the investigated range of wavelengths. The obtained results indicate that the optical parameters of the NiO film are controlled with boron doping. 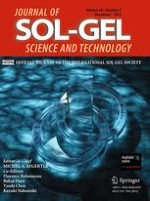