The threat of release of methane sequestered in the circumpolar Arctic regions of the world creates the possibility of triggering additional feedback effects from the terrestrial and the deep ocean systems which could potentially add large amounts of carbon (C) into the atmosphere. This paper analyses the implications for C mitigation policy under the threats of a substantial permafrost methane release. Several insights emerge from the analysis. First, the presence of non-linear feedbacks creates a bifurcation zone in the C emissions-stock space, on one side of which large accumulations of atmospheric C materialize leading to significant damages. Second, the bifurcation line does not have a steep slope, implying that it would be possible to avoid falling on the wrong side of this zone even if the current atmospheric stock of C were higher than what they are today. Third, when the release of permafrost C is uncertain, there is benefit in reducing anthropogenic C more than what would be optimal under a certain release of the same. Fourth, higher abatement cost scenarios do not necessarily imply significantly reduced abatement efforts. On the contrary, abatement efforts, which are only reduced marginally under this scenario, ensure that long run carbon path is stabilized. This is done in order to avoid incurring substantial costs of abatement in the future when non-linear feedback effects kick in. 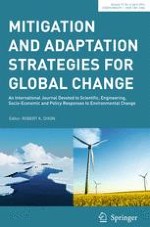 The determinants of support levels for wind energy in the European Union. An econometric study