Controlling the values of natural frequencies of a structure plays an important role to keep the dynamic behavior of structures in a desirable level. This paper is concerned with the optimal design of large-scale dome structures with multiple natural frequency constraints. This optimization problem is highly nonlinear with several local optimums in its search space. The idea of cascading, which allows a single optimization problem to be tackled with a number of autonomous optimization stages is used. The procedure utilized in this paper reduces the objective function value over a number of optimization stages by initially operating on a small number of design variables, which is gradually increased stage after stage. In order to show the effect of using coarsening of variables for handling the optimization problem, independent of the effect of the algorithm, the recently developed approach (enhanced colliding bodies optimization) is employed in the entire stages of the present method. Besides, we want to demonstrate the positive effect of using multi-DVC cascade optimization procedure even if the utilized algorithm itself is a powerful method. In order to test the performance of the algorithm, four dome truss design examples with 120, 600, 1180 and 1410 elements are optimized. The numerical results prove that the utilized method is an effective tool for finding optimum design of structures with frequency constraints. 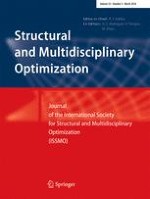 Topology design for maximization of fundamental frequency of couple-stress continuum