Each sensor in WSNs receives data from the limited area under its coverage. The received data is processed by the sensor; then, it is wirelessly transmitted to the sink. Sensors’ energy consumption and the energy hole problem are considered as outstanding challenge of these networks. That is, since sensors use batteries with limited lifetimes and sensors which are closer to the sink transmit more data than remoter sensors, hence, they run up their energies sooner than other sensor nodes. Consequently, optimizing energy consumption is regarded as one of the most critical issues throughout a network’s operational lifetime. In this paper, by dividing a respective area into several smaller areas and using a multiple mobile sink (MS), we proposed an unequal clustering method via fuzzy logic which leads to the reduction of distances among sensors with respect to the movement direction of sink. As a result, the sizes of clusters are reduced. Accordingly, such a reduction in the sizes of clusters and the smart selection of the route by the MS eliminates energy hole issue. Regarding the metrics of FND and HNA, it was found that the proposed method optimized energy consumption for 19%. Hence, it was able to fix energy hole problem in WSNs. 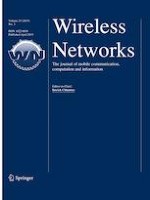 Technological aspects of WBANs for health monitoring: a comprehensive review