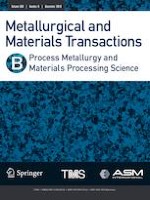 Kinetics of the Carbothermic Reduction of Manganese Oxide from Slag

Microstructural Modeling of the α + β Phase in Ti-6Al-4V: A Diffusion-Based Approach